From Saint Meinrad to South Africa: The Journey of Archbishop Peter Wells

An Interview with Archbishop Peter Wells 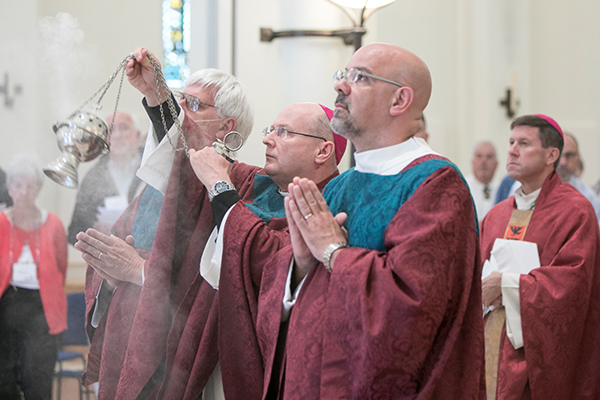 Editor's note: Archbishop Peter Wells (with incense, in above photo) is a 1987 graduate of Saint Meinrad College and currently serves as Apostolic Nuncio of South Africa, Botswana, Lesotho, Namibia and Swaziland, and as the Titular Archbishop of Marcianapolis. He received the Distinguished Alumni Award in 2018 from the Saint Meinrad Alumni Association. This post originally appeared in Voices from the Vineyard, found at https://alumni.saintmeinrad.edu/page/Voices

“I had finished my pre-med pre-requisites in Oklahoma, and I was hoping to go to medical school. I had thought about it for many years off and on at the possibility of a vocation [to the priesthood], so I decided to give it a try. I wasn’t sure.

But to be honest with you, I hadn’t been here [Saint Meinrad] even a week and I already realized that it seemed like this was the way God had laid out for me.”

His Time at Saint Meinrad:

“But, it [the time at Saint Meinrad] cannot, not stay with you. I just used a double negative there.

I think the reason is, because of, not only the incredible tradition that is breathed in this place, but the spirituality and the goodness of the monks. We had wonderful community life as students. There was a lot of joy, there was a lot of laughter, there was a lot of prayer, and there was very serious studying. I think it has stayed with my priesthood, those early years of formation. Ora et Labora, it’s not only for Benedictines, but prayer and work is for all of us who are in ministry.”

Becoming a Priest of the Vatican Diplomatic Corps:

“You don’t decide to join. You’re drafted into the Vatican Diplomatic Corps.

The way it works, it’s interesting. I had gone to school at the North American College in Rome, and after I was ordained a priest I went bac and finished a graduate degree, and then came home. I was in parish ministry, as well as had some chancery jobs for the first four years.

They asked if my bishop would be willing to release me for that. After some discussion with me, and of course with other priests in the diocese, I decided to go ahead and to try it. I tried it, and once again, I found it to be very fulfilling.”

“I think you could do an entire course on these three popes. In a sense they’re all the three post conciliar [Vatican II] popes, and they bring in very different human characteristics, but I think a very similar ecclesial vision, in some ways, of what it means to be a post Vatican II church.

Pope John Paul II was a great Christian anthropologist … and put some philosophical underpinnings, if you will, to much of what happened during the council.

Pope Benedict XVI was a patristic father in the 2000s. He gave us a sense of fundamental, theological teaching based in the council and in the long tradition of the Church, which I think people will refer back to for centuries.

Pope Francis has an extraordinary ability to touch the ordinary person. He is, is a sense, the par excellence of a catechist. He has taken what has been extolled from the council, what came from the magisteria of John Paul II and that of Benedict, and is able to make people, normal, ordinary people in the pews appreciate it, and to live it, and to give examples of how that faith is to be lived. I think we really needed that. The Holy Spirit is wonderful, always offers us the perfect person at the perfect moment.”

His Service and Appointment to South Africa:

“Whenever I was in the Vatican, for a number of years I worked in what they call the English section of the General Affairs section of the Vatican, and I watched over a number of African countries at the time. One of them was South Africa, so I'd always kept up a bit with what was going on in South Africa, but mainly at a political and ecclesial level. I don't think I really realized what was going on, on a sociological level, and the social challenges at the level that we see them in the country. In many ways I'd been very surprised at how developed the country is.

There are a number of challenges there. Extreme poverty is a real challenge. There's also an extreme difference between the very rich and the very poor. There is a lot of problems with racism and xenophobia that are still prevalent, not only in South Africa, but in all of Southern Africa you see these problems, as you see them in the rest of the world today, to be honest. These are constant issues that we're having to address and to look into. It's a complicated society. We're talking about 11 different language groups, at least. Those are the official language groups that are recognized.”

“I work as the Pope's ambassador from one state to the Holy See, and so, as an ambassador, I do the things that other ambassadors do. I go to meetings of the Diplomatic Corps and Heads of Mission. We have a number of bilateral interests, including things such as climate change, or empowerment of people, women's rights and children's rights.

Human trafficking is a huge concern of ours, so I would be an interlocutor with the rest of the Diplomatic Corps and the local government to present the interest of the Catholic church in those particular topics, as well as many, many others. Then I also work with the local churches. We have 36 jurisdictions in that area and around close to 40 bishops.

My work can be varied. A lot of it is bureaucratic. Lots of it is pastoral though. I'm almost every weekend at a different parish. I do things that everyone else does. I do confirmations. I have done weddings. I do baptisms. I do pretty much whatever people need so, it's a very varied ministry.”