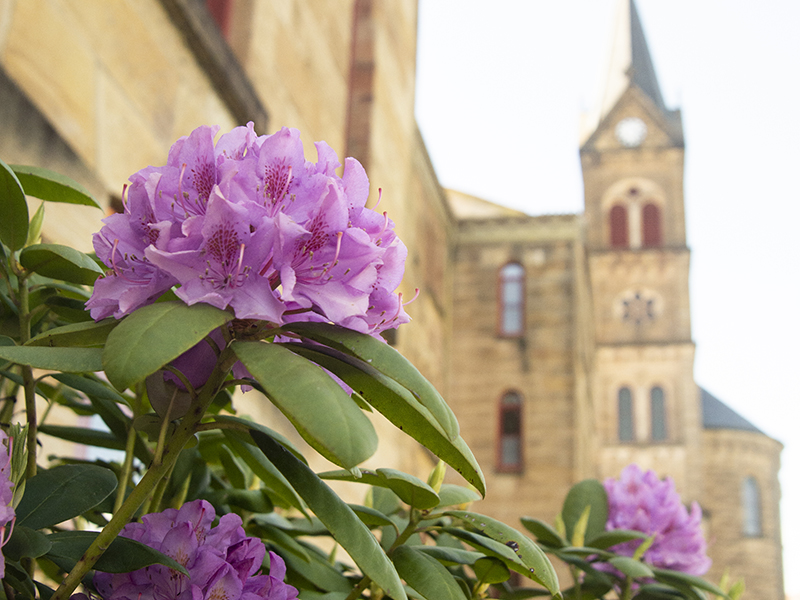 It was a lovely late-summer morning; the air was relatively dry and cool for early September and the sky was the color of a Caribbean seascape. That morning, after a meeting in the business office, I took a walk to see how the new gazebo on the hill above was progressing. I have loved that spot ever since becoming a monk in 1992 when, as a novice, I discovered that breezy location as a great place to spend time in prayer, or just to find some peace and quiet.

As I stood on the cement platform over which the new gazebo had been raised, facing south, I was caressed by warm, soft breezes, and I found it as restful as I ever have in the past. Looking out over the Anderson River valley, I noted the fields which, in the past, used to be planted in beans or corn, but today have lots of young trees growing in them and lots of wild flora species as well.

What contributes to the sense of "specialness" people say they feel about Saint Meinrad Archabbey is the tranquility they experience while visiting, and what I believe grounds this sense of peace is the beautiful rural landscape that is so much a part of the St. Meinrad experience.

The fields, streams and woods of the surrounding landscape, the rolling hills and farm fields, along with the wildlife occasionally spotted on campus, such as deer and turkeys, foxes and hedgehogs, provide a natural backdrop that prompts us human beings to remember that we are not above the created order, but very much at home in nature because we are part of it.

You may think this seems more resonant of a "Franciscan" spirituality, but from the beginnings of monasticism, since the time of St. Anthony in the early fourth century, monastic men and women have tended to establish their monasteries in remote locations - even as remote as lonely islands or deep, mountaintop forests. So when monks came to America in the middle-19th century from Europe, they landed in rural places, far away from any substantial town or city.

Environmental stewardship is an important and often overlooked part of monastic spirituality, and an important monastic value. I feel it's vital to reconnect with this value in our times of concern over climate change and sustainability, as natural resources continue to be threatened by development and exploitation.

In the first creation story found in the Book of Genesis, God fashions humankind in the divine image and likeness. Along with that dignity, God gives to man and woman shared responsibility over creation, exercising "dominion," the text reads, "over all the fish of the sea, the birds of the air, over the cattle and all the wild animals of the earth, and over every creeping thing that creeps upon the earth" (Gen 1:26).

Ecological concern is fostered by Benedictine spirituality, which places accountability near the top of its list of essential values. But concern for the environment is something all of us should share today, whether the land you call home is a small apartment, a house, or a 40-acre farm. Though you would be hard pressed to find explicit mention of ecological stewardship in the Rule of St. Benedict, it has been argued that the key Benedictine values of humility, stability and frugality provide an ethical foundation for our tradition of stewardship of the land.

Humility demands that we "keep the fear of the Lord ever before our eyes" and "constantly remember everything God has commanded" (Rule of St. Benedict 7:10-11). As stewards of God's creation we must act in the likeness of God-"let us recall that we are always seen by God" (RB 7:13) and will be held accountable for our actions. Loving the world God loves (cf. John 3:16), we care for the land and its resources as intentional Christians dedicated to God's ways.

Fr. Terence Kardong, a monk of Assumption Abbey in North Dakota, has suggested that, "Those who live in a place have the biggest stake in it." I agree. Part of what it means to be stable is to be rooted in a place: to make one's home in a particular place, with a specific group of people. Indiana is where we have made our home as monks of St. Meinrad, and many share this place with us as neighbors living in the area.

True monks, according to St. Benedict's 6th century rule, do not wander from place to place, seeking their own wills, but commit to a community and settle down in one place. Stability invites us to know the place well, to appreciate and cultivate our environment so we can leave it better off than when we found it. I've always enjoyed learning new things about the local species of plants, trees and animal life; to really know the place in which I live makes me feel that I belong here.

Monks are to be frugal. St. Benedict directs that the distribution of goods are according to need, and to be satisfied with what we have. Even in terms of food and drink, Benedict quotes Luke, "take care your hearts are not weighed down with overindulgence" and mandates that "frugality is the rule" (RB 39:9-10). This is the spirit with which we should approach the care of our environment as well. Taking only what we need, not willfully exploiting resources until there is nothing left for future generations or until the land (or sea for that matter!) is stripped of its capacity to support life.

We are all accountable as stewards of creation. Each of us plays a small part in the responsible care of the environment. When we turn off lights when not in a room, turn up the thermostat (or down!) a few degrees, carpool, cease burning our trash, plant trees and recycle, as well as stay informed about the issues, we make a difference and contribute to the Godly stewardship of the environment that our Creator expects of us.