The Saint Meinrad Psalm Tones at 50 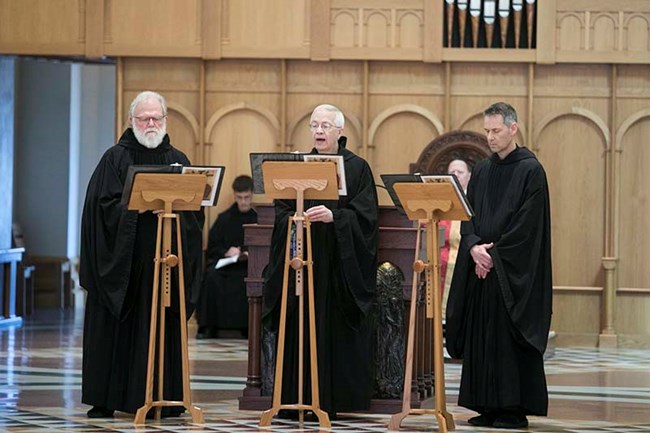 Following upon the liturgical reforms of the Second Vatican Council, when each nation’s vernacular language became the standard for use in the liturgy, Catholic liturgical musicians throughout the English-speaking world faced a number of shared challenges.

What were the best sources for good English hymns within the liturgy? Where would one find musical settings for the responsorial psalms and the other Mass parts? In addition to these needs, there was also the shared need for psalm tones—both in the Mass and in the Divine Office.

The psalm tones used with the Latin texts were written for psalm verses sung basically in couplets. They were also written with the accent patterns of the Latin language in mind. Following the Council, psalms began to be sung not only in one’s native language, but also in complete stanzas—sometimes three lines, four lines and up to as many as six lines.

In English-speaking Benedictine communities of men and women, where the liturgy plays such an important role in the daily life of the community, any number of monks and sisters took up the challenge and put their hand to the task of composing music for this “new” way of singing the psalms. In addition to crafting singable melodic patterns, these composers also needed to take into account the accent patterns of the English language.

It was in this context that the so-called Saint Meinrad Psalm Tones were born. In 1970, five years after the Council, work began on crafting psalm tones for each of the eight Gregorian modes. By the next year, the tones were complete and being used in our liturgies in the Archabbey Church.

In the summer of 1973, at a meeting of Benedictine musicians, the Saint Meinrad Psalm Tones were introduced to the 120 Benedictine participants from all over the U.S., England, Canada, Central America and the Caribbean. Since everyone needed psalm tones—and because Saint Meinrad’s tones were found to be so versatile—they were very quickly adopted throughout the English-speaking Benedictine world.

From that modest beginning 50 years ago, the psalm tones have since made their way to many countries around the world. They are regularly used not only in Benedictine monasteries, but in parishes, religious communities and seminaries far and wide.

One little footnote about these psalm tones. While they are the work of three monks of Saint Meinrad—the late Father Columba Kelly, Father Samuel Weber and Father Tobias Colgan—one of the tones (Mode 8) was originally composed by a monk of Gethsemani Abbey in Kentucky, Father Chrysogonus Waddell.

Saint Meinrad “borrowed” his tone and adapted it a bit for our use. Years later, when approached about receiving due credit for his psalm tone, Father Chrysogonus waved off the idea, saying that his tone had now become known as one of the Saint Meinrad tones, and that he was fine with that!

If the liturgy in a Benedictine monastery is the heart of the community’s life, it is certainly true that psalm tones that can be sung effortlessly, from memory, help to keep the lifeblood of God’s Word flowing through the veins of the singers. Saint Meinrad was blessed to be in a position 50 years ago to make this possible for countless numbers of the faithful from all walks of life. There is every reason to believe that this blessing will continue for many decades to come.

This story was first published in the Summer 2021 issue of the On the Hill newsletter.