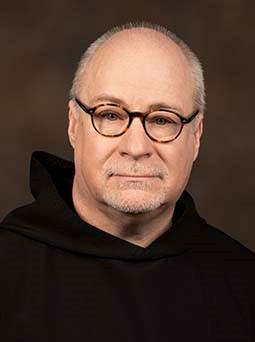 Appointed by Archabbot Justin DuVall, OSB, following the recommendation of the School's Board of Trustees, Fr. Denis Robinson, OSB, became the 14th president-rector of Saint Meinrad Seminary and School of Theology on June 1, 2008.

Since 2007, Fr. Denis served as assistant professor of systematic theology and executive assistant to the president-rector at Saint Meinrad School of Theology. In 2007, he was named subprior (third in leadership) of the monastic community.

Fr. Denis was born Sidney Lynn Robinson on August 13, 1962, in Iuka, Mississippi. He attended Saint Meinrad College and School of Theology, earning a bachelor's degree in philosophy in 1989 and a Master of Divinity in 1993.

From 1993-97, he was parochial vicar for the Cathedral of the Immaculate Conception in Memphis, TN.

From 2002-05, Fr. Denis was also a member of the editorial board of Louvain Studies and coordinator of a faculty research project, "Orthodoxy: Process and Product."

Fr. Denis is the author of numerous articles and has contributed to several theological texts. He is the editor of Sacerdos in Aeternum: Reflections on the Priesthood Today and co-editor of Theology and Religious Pluralism.

Read his talks and homilies