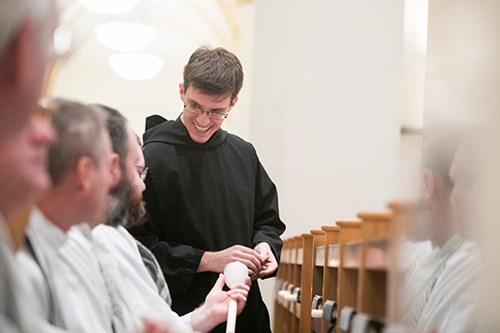 Where are you from? How did you first hear of Saint Meinrad? What did you do professionally before joining the monastery?

I am originally from Grand Rapids, MI. I heard about Saint Meinrad as a high school student. I came for a “One Bread, One Cup” liturgical conference with my parish. My background is chemical engineering. I worked as a production manager for United States Steel in the greater St. Louis area.

What drew you to monastic life?

Living in an intentional community centered on prayer was the main draw for me. I was also looking for a way that I could grow in love of God and neighbor. On some level, the idea of living a monastic life would not go away when I was younger. I felt like I would regret it if I at least did not try it out. Also, when I was visiting Saint Meinrad, the monks seemed like joyful and genuine people. Their example and witness were important for me when I was first thinking about monastic life.

Since joining the monastery, in what ways have you grown in your relationship with yourself? With God?

Entering the monastery has been an opportunity for me to offer everything I am both to God and my neighbor. I have also been able to grow in the realization of who God has intended me to be. I can love who I am in the current moment, realizing that I will never be flawless. I can see that I am on the way of conversion, and I have faith that this conversion will last a lifetime. In my own brokenness and suffering, the men of this monastic community have repeatedly shown me what it means to be loving and merciful.

Although these qualities come to perfection in the Lord, they are not superhuman. Having an intentional, friendly conversation with a confrere, helping an individual prepare his lunch tray, and coming to our common prayer even when desire is lacking are all times I have witnessed and experienced love and mercy in this community. God is opening my eyes to see Him in everything and everyone around me.

Why did you become a monk of Saint Meinrad and not a monk of another house? What about this place and this mission called you to spend your life in service to it?

In some sense, I did not really feel an urge to explore a religious life outside of what I had previously experienced. I encountered the Benedictines at Saint Meinrad through “One Bread, One Cup,” and I encountered the Marianists through my studies at the University of Dayton. The rhythm and the community life of the Benedictines in general were very attractive to me. When I thought about the Benedictines, I was only familiar with the monks of Saint Meinrad. I kept coming back to this place every year since 2005. It is hard to put into words, but the ideas of religious life and Saint Meinrad were synonymous for me.

Why does the Rule of St. Benedict still matter? What does it have to offer to a secular, post-modern world?

In short, the Rule is a guide to realizing one’s ultimate freedom. It is not a book of law. This freedom is not even about following particular rules because a certain authority says so. Specifically, I think the Rule offers a way or a practice for people to start recognizing the flourishing of their own heart. In reflecting on one’s own natural desires, the Rule offers a beginning to form those innate desires in a way that cultivates virtue. From this perspective, freedom is much more than making an independent and autonomous decision between contraries. The Rule is not really fruitful if freedom is understood in that way. If nothing else, the Rule might help us see that true freedom is something more than being able to choose what I want.