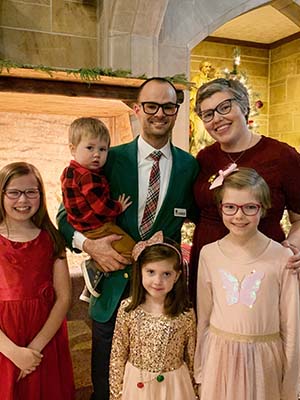 If you’re looking for perseverance in action, you could find a good example in Nikki Taylor. The mother of four kids under age 12 is working on her master’s in theology, running a household with her husband Justin during a pandemic, and – until recently – working fulltime as the director of religious education (DRE) for two parishes.

Nikki was accepted into the Master of Arts in theology program about three years ago – the same week she learned she was pregnant with their fourth child. A couple of years earlier, Nikki had converted to Catholicism. She enjoyed the faith discussions that were part of the RCIA program, she recalls, and thought theology classes would fill that void. “I felt like there was so much more that I wanted to learn about the Catholic faith.”

She thought she might want to go into professional ministry after she earned her degree, but the job found her first. Her pastor, who knew she was studying at Saint Meinrad, suggested her as a replacement for the DRE who was leaving. Until this past May, Nikki served as the fulltime DRE for St. Patrick and St. Margaret Mary parishes, both in Terre Haute, IN.

She loved the job, but realized she needed a better work/life balance – and then there was the pandemic. All four kids were home from school and, like everyone, Nikki found her life turned upside down.

This fall, three of the kids are back in school. However, at the time of this interview, one daughter had been sent home for distance learning because someone in her class had tested positive for COVID-19. “I think perseverance would be a good word for dealing with the past few months, and also just an openness to God’s will, because it’s hard to know what the future holds.”

With churches shut down and Mass available by livestream, the Taylors have focused on cultivating their faith at home. “We’ve been to Mass a few times, but it’s very challenging with four children. You don’t know if the little one is going to lick the floor or what.”

One area they have worked to strengthen is family prayer time. At night, the kids all pray for their own intentions, she explains. “We pray for their teachers and administrators as they make decisions for everybody’s safety … and then we let them choose a prayer to pray.”

And on their way to school, they pray the morning offering and say a prayer to St. Michael the Archangel. “We try to put it in our routine as we can, so that we can pray together as a family,” she says.

Meanwhile, Nikki is taking an online course toward her master’s this fall and working toward graduation in the spring. “We’re doing well … but we’re learning how to just be open to what’s in store each day.”