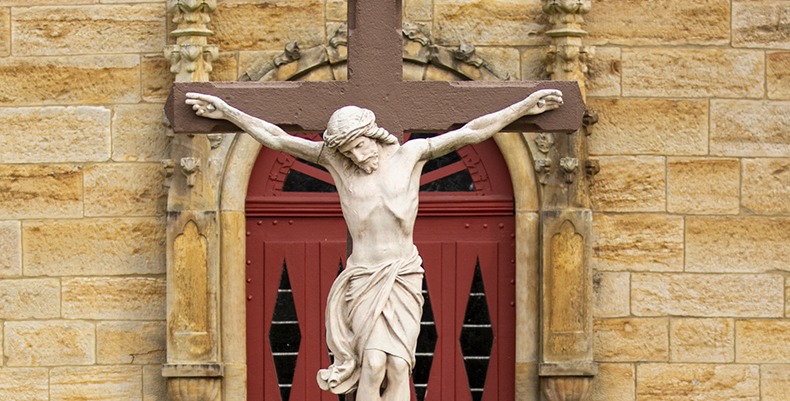 Eutyches. It is pronounced “you-tick-ease.” He sure was a thorn in Pope Leo the Great’s side, but we can learn a lot from their dispute. Their dispute is especially timely as we journey toward Christmas this Advent season where, on Christmas Day, we read the famous Nativity sermon of Pope St. Leo the Great during the Liturgy of the Hours. The line, “Christian, remember your dignity,” might stand out as a famous line from that sermon.

Before elaborating on the drama of their dispute, I first want to give some background on Pope St. Leo the Great. Leo the Great presided over Rome and the whole Church as Pope from 440 to 461. He was influential in Christianizing Rome and helping the great city transition and transform away from its pagan myths.

To help solidify the Christian way of life, Leo preached many delightful sermons on the Christian feast days that replaced the former pagan festivals. Here, his theology shined to, as historian Eamon Duffy put it, “account for why Rome mattered” for Christianity.

The Catholic Church transformed Christian Rome by building its foundation upon the witness of Saints Peter and Paul, who were martyred for spreading the faith. Just like the Roman Empire spread out in all directions, so too did Christianity spread out from Rome by the witness of martyrs, preachers, and missionaries.

Let us return to the debate between Eutyches (what a fun name!) and Pope St. Leo the Great. Eutyches, a theologian, and his followers taught that Jesus’ two natures, human and divine, were somehow fused together. He was not just a human, but he was not quite fully divine either.

Leo responded to this and other questionable theologies at the time through a document that became known as the Tome. Leo insisted that Eutyches’ theology “muddled,” as Duffy understands, Christ’s person into some kind of “monstrous hybrid.”

Leo declared that Jesus is one single person with two natures, human and divine, and these natures existed without confusion and they worked together for the good of our salvation. This theology leads us to Leo’s Christmas sermon.

Not only was Leo intellectually gifted, but he also wrote pastorally to help the Church understand the significance of something like Christ’s single person and two natures. Theologian Benjamin Thomas interprets that Leo was not only writing and preaching about Christ’s two natures for the sake of defending the faith, but also to help Christians understand their ordinary and extraordinary lives.

If Christ were not perfectly human and perfectly divine, “Our humanity could not have been redeemed and made immortal, and we would still be in our sins,” Duffy reflects. This is why Leo, in his famous Christmas sermon, exclaimed, “Christian, remember your dignity.”

He continues the sermon: “and now that you share in God’s own nature, do not return by sin to your former base condition.” Christ came to redeem our humanity by his humanity and his divinity. Our humanity was worth saving, and Christ died for us to show us that God cares so deeply for us.

My encouragement for you this Advent season is to pay extra special attention to the scripture readings, especially the Old Testament readings that heralded Christ’s coming. With the quick pace of life these days, we often neglect to remember what a great gift it is to simply be human – humans redeemed by Christ.

May this Advent season be time for you to recognize your dignity and the great gift it is to love and serve our loving God. (And, maybe you can work the name “Eutyches” into your family and Zoom conversations in these coming weeks.)

International Commission on English in the Liturgy, The Liturgy of the Hours: According to the

James, Norman W. “Leo the Great and the Social Background of the Italian Episcopate.” Rivista

Sieger, Joanne Deane. “Visual Metaphor as Theology: Leo the Great's Sermons on the