The Workshop of Community 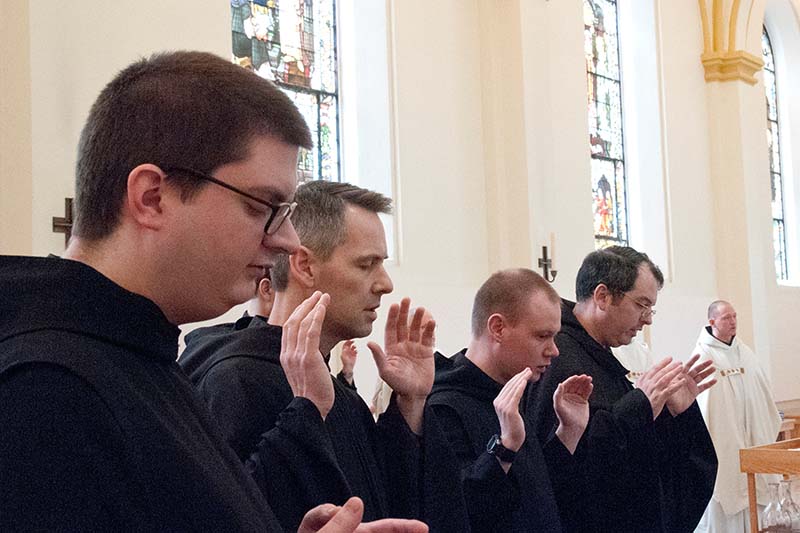 When people ask what drew me to the monastic life, I usually give a pat answer, something along the lines of the beautiful liturgy, the prayerful chant, the peaceful place, the usual things most people love about Saint Meinrad. But really it is the community itself, the fact of community, that (still) attracts me to the Benedictine way of life.

In the first chapter of his Rule (RB 1, “The Kinds of Monks”), St. Benedict establishes the central role community will play in his “plan for the strong kind (of monk), the cenobites” - the kind Benedictines are. (RB 1:13.) By describing various other kinds of monks, Benedict clearly establishes that any who want to be “the strong kind” must, first, “belong to a monastery, where they serve under a rule and an abbot” (RB 1:2). This amounts to committing one’s life to a specific community, choosing to adhere to a common code of conduct and abide by the authority of a leader chosen by the community.

Thus, Benedict sets the scene. In the monastic community, the individual members will build up their strength from the “battle line in the ranks of their brothers” (RB 1:5). By the experience of living together, striving for peace and unity, learning to respect the diversity of individuals while at the same time surrendering personal preferences and willfulness, monks grow to become mature, disciplined “artisans of the spiritual life,” to “do battle for the true King,” to be obedient “disciples (students) of the Master,” to use some of the metaphors found in the Rule for what a monk is meant to be.

By comparing the “strong kind” of monk, i.e., monks who live in community, under a rule and an abbot, with those who “have a character as soft as lead” and who “lie to God by their tonsure,” St. Benedict emphasizes the importance of community as a “workshop where we are to toil faithfully” (RB 4:78), learning virtue and defeating vice, wherein each of us is tried “like gold is tried in a furnace” (RB 1:6). Conflict in the community is not in itself a bad thing; it is an opportunity to hone one’s skill in virtue – especially charity, patience, humility, and obedience.

Without a community to “try” us, or support us really, in this way, there can be no growth in virtue. For those who pursue their own will, “without a shepherd” (abbot), “their law (rule) is what they like to do, whatever strikes their fancy” (RB 1:8). These are what Benedict calls a “detestable kind” of monk – with “no experience to guide them, no rule to try them” (RB 1:6).

Freedom is never simply “doing whatever one pleases.” Real freedom is achieved when we make choices that accord with the truth – and for us Christians, that Truth is Christ. The community, and our commitment to one another, provides a web of relationships wherein we hone our ability to choose actions that correspond to our true selves in Christ. In this way we follow Christ by doing what he did!