Set Out for the Loftier Summits 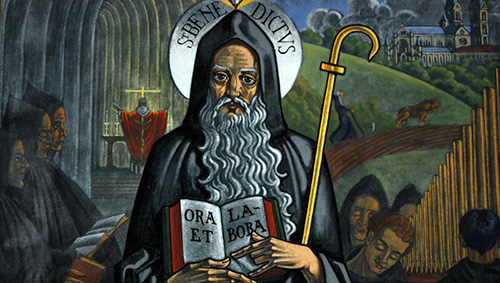 The reason we have written this rule is that, by observing it in monasteries, we can show that we have some degree of virtue and the beginnings of monastic life."
Rule of St. Benedict 73.1

Sometimes when we get caught up in the details of a project, or a process, we can miss the overarching goal or purpose. "Missing the forest for the trees" is a good way to get lost among the trees and lose one's sense of direction - and this can happen in spiritual life as well, whether lived in the monastery or the marketplace.

Stepping back a bit from the close examination of the finer details of the RB, I'd like to reflect on how St. Benedict's Rule is part of more comprehensive program of formation for the Kingdom.

In the concluding chapter of his Rule (RB 73), Benedict writes that this "little rule" is only a beginning, a foundation for more advanced stages in one's journey to the Kingdom.  Obedience to the Rule is a start toward a greater freedom, which leads to an increased capacity for virtue - a word that means "strength."

Virtue is the power to do what we know by faith charity demands of us, and to do it more readily, more "naturally," and with less resistance from our weakness-prone, creaturely nature.

To love others as God does is only possible if we've undergone some amount of transformation in Christ, which is really what Benedict's Rule and monastic discipline are for. The "school of the Lord's service" is meant to train men and women to become better instruments of charity, and more intentional co-creators with Christ in building his Kingdom on earth.

But we are also meant by Benedict to go beyond the Rule. RB 73 bids the monk to study and learn advanced modes of charity by studying the writings of other monastic authors and those of the "holy catholic Fathers" who explain and expound on the inspired books of the Old and New Testaments, "the truest guides for human life" (73.3). Benedict encourages the study of the spiritual masters that preceded him, whom he studied and learned from, and who, therefore, were a great influence on his thinking and thus his Rule.

All this, along with his Rule, he writes, are "nothing less than tools for the cultivation of virtues," strengths that will enable us to "hasten toward our heavenly home." After some time learning the basics by keeping "this little rule," Benedict encourages us to "set out for the loftier summits" contained in the teaching and virtues of the great saints, which, if we are sincere in our striving, he promises "under God's protection we will reach" (RB 73.9).