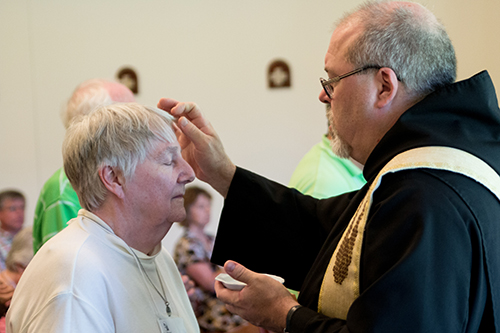 Take war, for instance. It isn't as though we aren't familiar with this ultimate power struggle. Many of us were born during World War II. A few years later, we sat beside our parents and listened to radio reports about the conflict in Korea. Vietnam came along just in time to steal from our graduating class. The Persian Gulf took some of our sons and daughters.

Today some of us are old enough to have grandchildren still fighting in dangerous places. Is it any wonder we want to remove ourselves from conflicts involving people in search of this kind of power?

Perhaps the reasons the elderly aren't seen marching off to war may be more spiritual than physical. We have seen enough to understand that power, taken by force, can be quickly taken by someone else. The stories of Adolph Hitler, Saddam Hussein and so many others who took as much power as they could are part of our own living history.

In this half of life, we have made a shift from searching for power to learning what it means to be people of a different kind of power. We are more interested in the power of love that fills people without taking anything from them. We would rather be remembered as having the heart of Mother Teresa than the ability of any politician.

In fact, even some of those with power enough to have daily coverage in most papers are beginning to understand the difference between having power and being power-full people. Bill Gates and Warren Buffet have earmarked much of their wealth to address the needs of the powerless. The U2 singer Bono has used his fame as leverage to focus on the needs of the poor in Africa.

The most power-full people use whatever they have been given to transform lives of the powerless. That can mean anything from donating billions to faithfully serving in a food pantry.

Those who seek personal, earthly power consume whatever they want without regard for the needs of others. Power-full people overflow with the love of God and delight in emptying themselves for the sake of others. Filled with an inexhaustible supply of God's love, they need little and give away much.