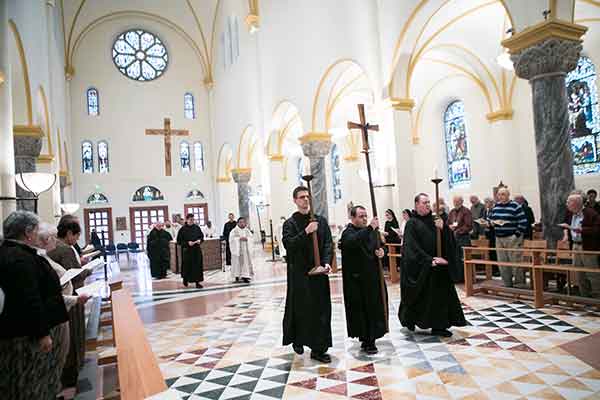 "The monks keep their rank in the monastery according to the date of their entry, the virtue of their lives, and the decision of the abbot."

When guests attend the monastic liturgies that involve the monks processing into the church, they will frequently notice (I get asked about it all the time!) that we enter seemingly by order of age. The youngest lead the procession and the elders come last, before the abbot and subprior.

Well, there’s a reason for that. But it really isn’t about age, that’s kind of coincidental; it’s about rank, or seniority, as we more typically say today.

We enter the church in seniority, and in our refectory, we eat the main meal of the day sitting in seniority and are served our food in seniority – the superiors’ table first, then according to seniority and, finally, the table where the novices and candidates sit.

Being so far removed from the time St. Benedict wrote his Rule in the early sixth century, it’s hard to see how radical the Rule really was. St. Benedict’s way of ordering his monastic community was distinctly different from the way social status was determined in late antiquity, which was based on economic wealth and political stature.

The social elite in the late Roman world of Benedict’s time were the “patrician” and “senatorial class” families whose nobility could be traced back to the glory days when Rome was a great world power. Otherwise, social rank was established by wealth, which allowed one to have more leisure, the truest mark of social status in the Roman world.

St. Benedict wanted to say something counter-cultural by the way he decided to “order” his monastic community. Instead of rank based on noble status and wealth (or even priesthood), Benedict chose to order his community based, first of all, on when one entered the community. What your family name was did not concern Benedict – he saw all as equals before God, such that not even age shall automatically determine rank (RB 63.5).

This was not new to Benedict. The first rule ever written for communities of monks and nuns (St. Pachomius’ Rule composed in the first half of the fourth century) also assigned seniority to members in this way. What was new with Benedict was that certain considerations allowed the abbot to adjust the seniority of a monk.

He writes, as quoted above, that besides date of entry, the manner of one’s life could also play into the abbot’s decision to adjust a particular monk’s seniority. This is to be prudently determined, however, for the abbot is “not to disturb the flock entrusted to him” (RB 63.2) by making such adjustments arbitrarily or unjustly - whether promoting or demoting - or, God forbid, out of favoritism (RB 2.16). Nevertheless, Benedict leaves such considerations up to the abbot.

Thus, St. Benedict underscores the belief that, whether slave or free (i.e. no matter our worldly social status) we are all one in Christ (Gal 3:28), and as he writes elsewhere in his Rule, “we share alike in bearing arms in the service of the one Lord, for God shows no partiality among persons” (Rom 2:11). Virtue (a holy life) is the preferred standard for judging status in St. Benedict’s community.