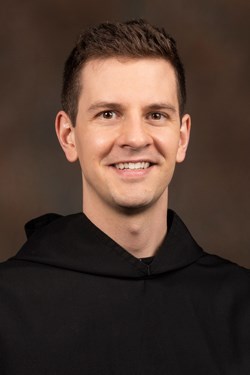 Fr. Simon Herrmann, OSB, a monk of Saint Meinrad Archabbey, was ordained as a Roman Catholic priest on June 27, 2021, by the Most Rev. Charles C. Thompson, archbishop of the Archdiocese of Indianapolis. The ordination was held in Saint Meinrad’s Archabbey Church, St. Meinrad, IN.

Fr. Simon is a former resident of Findlay, OH, and a graduate of the University of Dayton, where he earned a bachelor’s degree in communication management in 2010. He earned a Master of Arts in Catholic philosophical studies in 2017 and a Master of Divinity in 2021, both from Saint Meinrad Seminary and School of Theology.

He worked as an associate editor for the national office of Beta Theta Pi fraternity from 2010-11 and then at Saint Meinrad Archabbey as the director of alumni relations from 2011-14. He also served as a college intern for three summers in Saint Meinrad’s “One Bread, One Cup” program.

Fr. Simon joined the monastic community in January 2015 and professed his solemn vows in 2019. In August, Fr. Simon will begin an assignment as the director of young adult engagement in the Development Office at Saint Meinrad.