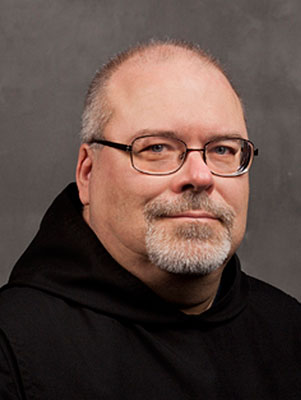 Fr. Julian Peters, OSB, a monk and priest of Saint Meinrad Archabbey, is an adjunct instructor in Latin and the Director of Institution for Priests and Presbyterates.

Fr. Julian was born October 29, 1960, in Toledo, OH. He attended both Saint Meinrad College and School of Theology, receiving a bachelor's degree in Classics (Latin) in 1982 and a Master of Divinity in 1988. In 1994, he received a master's degree in non-profit administration from the University of Notre Dame.

Fr. Julian previously served as secretary to the archabbot, secretary to the council and chapter, master of ceremonies, assistant archivist at Saint Meinrad Archabbey and was a commuting chaplain to Monastery Immaculate Conception in Ferdinand, IN.

Other assignments have included serving as administrator of the Cathedral of SS. Peter & Paul in Indianapolis, IN, and director of liturgy for the Archdiocese of Indianapolis.  He has also served as director of alumni relations, assistant to the president-rector and associate dean of formation (college) for Saint Meinrad.