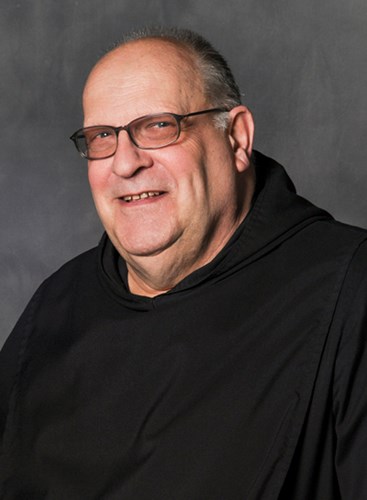 Brother Raban Bivins, OSB, a monk of Saint Meinrad Archabbey, died in the monastery infirmary on Tuesday, September 6, 2022. He was 81 and a jubilarian of monastic profession.

Br. Raban was born in Owensboro, KY, on December 11, 1940, one of eight children of Lester and Sophie (Bittel) Bivins. He was given the name William Joseph at his baptism.

After completing his elementary education at Saints Joseph and Paul Grade School in Owensboro, he attended Owensboro Catholic High for three years and then entered Saint Meinrad’s St. Placid Hall in 1957 to complete his high school education. Br. Raban was invested as a novice on April 9, 1959. He professed simple vows on May 7, 1960, and perpetual vows on June 9, 1963.

Br. Raban’s first assignments in the monastery included work in the shoe shop, in the Physical Facilities Department, and as assistant house prefect. In 1965 he volunteered for assignment at Saint Meinrad’s mission in Peru, and he spent the next 14 years there, serving variously as procurator, as superintendent of employees, and in general maintenance.

Returning to the monastery in 1979, Br. Raban served for 11 years on the volunteer fire department, six of which he also served as an emergency medical technician on the Rescue Squad. He also worked in the Physical Facilities Department and in 1984 became a certified locksmith.

In 1996 Br. Raban was appointed subprior, the first brother in Saint Meinrad’s history to be appointed to this leadership position. He served in this capacity for 11 years. During this time, he also assisted in the infirmary and health services.

He was appointed Archabbey almoner and director of community outreach in June of 2007, positions he held until failing health necessitated his moving into the infirmary earlier this year.