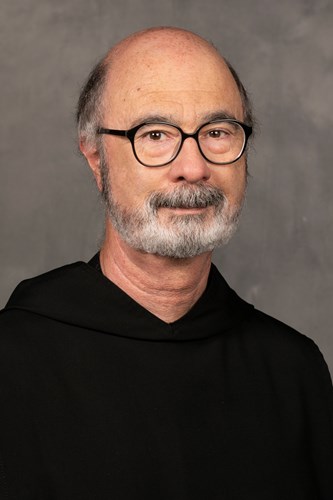 Father Justin DuVall, OSB, monk, priest, and former archabbot of Saint Meinrad Archabbey, died in the monastery infirmary on Tuesday, October 5, 2021. He was 70.

Fr. Justin was born in Toledo, Ohio, on July 7, 1951, to Arnold Bernard and Mary Jane DuVall. He was given the name Timothy Martin at his baptism. When his mother died when Justin was 3, he was raised by his father and stepmother, Nancy Luttenberger. He attended Holy Spirit High School Seminary in Toledo.

Following his ordination, Fr. Justin earned a Master of Arts degree in library science from the University of Michigan in Ann Arbor. In 1979 he was appointed assistant librarian in the Saint Meinrad Archabbey Library, a position he held full time for five years, and then part time for the next 11 years.

Other assignments in his early post-ordination years included liturgical master of ceremonies, assistant novice/junior master, and chairman of the monastery’s Liturgical Advisory Committee. In 1984 he was appointed prior by Archabbot Timothy Sweeney and held those responsibilities until Archabbot Timothy’s resignation in the summer of 1995.

During those years, his other responsibilities included serving as a member of the Archabbey Council and the Archabbey Strategic Planning Committee, and as a commuting chaplain for the Sisters of St. Benedict in Ferdinand.

On December 31, 2004, Fr. Justin was elected the ninth abbot and sixth archabbot of Saint Meinrad. On January 21, 2005, he received the abbatial blessing from his confrere, the Most Reverend Daniel M. Buechlein, OSB, archbishop of Indianapolis.

During his tenure as abbot, Archabbot Justin oversaw several significant building projects, including the final stage of construction of a new Guest House and Retreat Center and the renovation of St. Gregory Hall, St. Bede Hall, Newman Hall, and the St. Martin Center.

More recently, he oversaw extensive renovations to the infrastructure of the monastery, which included an addition to the infirmary and the installation of a geothermal heating/cooling system. He also led the final 18 months of the Archabbey’s largest-ever campaign, which raised nearly $43 million for renovations, endowment, and operating expenses.

Following his resignation as abbot, he undertook a five-year term as vice rector at Simon Bruté College Seminary in Indianapolis. He returned to the monastery in May of 2021 to assume the responsibility as the community’s novice/junior master. His new assignment was cut short with the unexpected diagnosis of pancreatic and liver cancer in early August.

The services will be livestreamed at www.saintmeinrad.org/live. Space is limited in the Archabbey Church. If you plan to attend in person, please call the switchboard at 812-357-6611. Masks are required in the church.