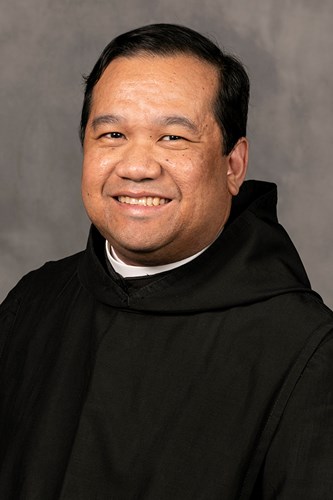 Fr. Mateo Zamora, OSB, professed solemn vows as a Benedictine monk of Saint Meinrad Archabbey in a ceremony on August 15, 2021, in the Archabbey Church at St. Meinrad, IN.

Fr. ­­Mateo, 44, is a native of Angeles City, Pampanga, Philippines. He earned a bachelor’s degree in communication from the Ateneo de Manila University in 1998. For two years, he was a college instructor at the University of Assumption before deciding to study for the priesthood.

He earned a Master of Arts in Catholic thought and life in 2004 and a Master of Divinity in 2007, both from Saint Meinrad School of Theology.

He also was a guest columnist for the Harrodsburg Herald from 2012 to 2015 and chaplain of the Morehead State University football team during the 2016-17 season.

At the diocesan level, he served on the school board (later renamed school council) from 2007-2012 and the presbyteral council from 2010-2015. He worked in the Lexington Tribunal, first as a case instructor and later as a defender of the bond.

Since his simple profession in 2018, he has been teaching homiletics at Saint Meinrad Seminary and School of Theology. He is a member of the Catholic Association of Teachers of Homiletics and the Academy of Homiletics. He is currently taking online classes toward a Doctor of Ministry degree in preaching from the Aquinas Institute of Theology in St. Louis, MO.

After solemn profession, he also will serve as one of the spiritual directors for seminarians. In the monastery, he has been serving as the custodian of Mass intentions and assistant in the Oblate Office. He is also a member of the CareNotes Advisory Board.

In professing solemn vows of obedience, fidelity to the monastic way of life, and stability in the community at Saint Meinrad, he becomes a full and permanent member of the Benedictine community.