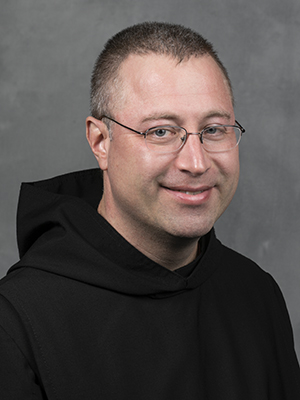 Fr. Paul is a monk of Saint Meinrad Archabbey since 2002, and was ordained priest in 2007. He worked as a Chemical Engineer in Terre Haute (IN) and Chicago before beginning priesthood formation at Saint Meinrad in 1999. He was Assistant Director and then Acting Director of Supervised Ministry for the seminarians for three years.

He studied at the Pontifical Biblical Institute in Rome, which was established by Pope Pius X in 1909 in response to advances in archeology, historical studies, and philology that contribute to our understanding of Sacred Scripture. He also studied for one semester at the Hebrew University in Jerusalem. He is a member of the Catholic Biblical Association.

He is a native of Huntingburg, IN, and since 1844 his family has lived in the local area near Saint Meinrad, attending parishes served by the monks of Saint Meinrad and the Benedictine sisters of Ferdinand. He has had family members in both Benedictine monastic communities.