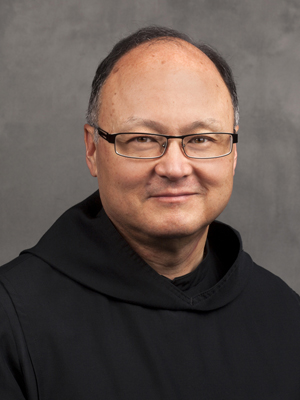 Fr. Mark O'Keefe, OSB, was the president-rector of Saint Meinrad School of Theology from 1996 to 2008. Before assuming office in May 1996, he had served in seminary administration for several years.

An educator and a moral theologian, he professed vows as a Benedictine monk in 1979, and began his studies for the priesthood at the Saint Meinrad School of Theology. He was ordained in 1983.

Fr. Mark teaches moral theology in the Seminary and School of Theology and formerly held the posts of academic dean and associate academic dean. He also is a consultant on medical ethics.

He is the author of a five-book series on the Catholic priesthood. They include Priestly Wisdom, Priestly Prayer,Priestly Virtues, The Ordination of a Priest and In Persona Christi.

Other books include Becoming Good, Becoming Holy: On the Relationship of Christian Ethics and Spirituality,What Are They Saying About Social Sin?, and  Deciding to Be Christian: A Daily Commitment

His most recent book is Love Awakened by Love: The Liberating Ascent of St. John of the Cross, published in 2014.

His articles have appeared in academic and popular journals, and he is a frequent speaker at gatherings of priests, seminarians and parish groups.