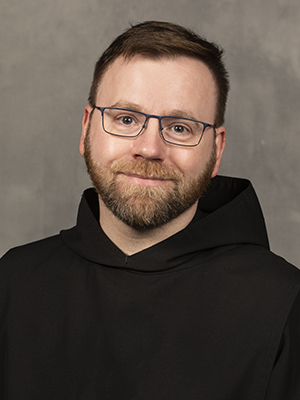 Fr. Thomas is a monk of Saint Meinrad Archabbey, where he professed his vows in 2006 and was ordained to the priesthood in 2010.

His research focuses on the metaphysics of St. Edith Stein (Sr. Theresa Benedicta of the Cross, OCD), and her creative dialogue between phenomenology and traditional metaphysics.

Other research interests include contemporary Thomisms, and the philosophy of William Desmond, who was his mentor at Louvain.

He is a member of the American Catholic Philosophical Association, the Metaphysical Society of America, and the International Association for the Study of the Philosophy of Edith Stein.

He serves as the new series editor of the Collected Works of Edith Stein (Institute of Carmelite Studies, Washington, DC).

His first book, Being Unfolded: Edith Stein on the Meaning of Being, was published by Catholic University of America Press in 2020.

He has served as a Formation Dean and Director of Pastoral Formation in the School. He currently ministers as Novice/Junior Master in the Monastery.