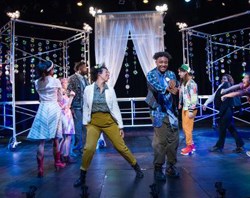 Saint Meinrad Archabbey, St. Meinrad, IN, will once again host the National Players, America’s longest-running classical touring company, as it presents plays on March 13 and 14.

On Friday, March 13, the actors will perform Shakespeare’s “As You Like It.” The performance on Saturday, March 14, will be “The Diary of Anne Frank.”

All performances are free and open to the public. Each show begins at 7 p.m. Central time in St. Bede Theater on the Saint Meinrad campus. Doors open at 6:30 p.m.

“As You Like It” is one of Shakespeare’s comedies, a female-driven story combining classic elements of romance and hidden identities. Banished from the only home she’s ever known, Rosalind assumes the identity of a man and escapes to the Forest of Arden with her cousin Celia and their fool Touchstone.

While there, they run into other exiled folks from the old court, including the dashing and brave Orlando, who won Rosalind’s heart prior to her banishment but was too tongue-tied to express his love in return. Determined to woo him, Rosalind persuades Orlando in her male disguise to win her heart. For only if Orlando loves her as a man will Rosalind know he truly loves her. 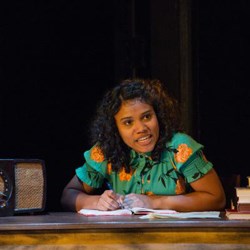 “The Diary of Anne Frank” takes place in 1942 Amsterdam. Thirteen-year-old Anne Frank goes into hiding with her family from the Nazis. For the next two years, she never leaves the attic where her family is concealed. With fear of discovery ever present, Anne finds solace writing in her diary, capturing the daily lives of the secret annex’s inhabitants – from the horrors of war to the excitement of first love – with wit, determination and idealism.

With a multicultural cast, National Players brings the true story of this incredibly insightful young girl that is often read in school to the stage in hopes of inspiring the next generation to stand up for justice rather than sit back in apathy.

A program of Olney Theatre Center in Maryland, National Players has earned a unique name and place in American theater history. Over the last 70 years, the acting company has performed in the White House; in Europe, Asia and the Middle East for American military; and throughout 40 states.