Four men professed solemn vows as Benedictine monks of Saint Meinrad Archabbey in a ceremony on January 25, 2019, in the Archabbey Church at St. Meinrad, IN. They are Br. Simon Herrmann, Br. Nathaniel Szidik, Br. Joel Blaize and Br. Jean Fish. 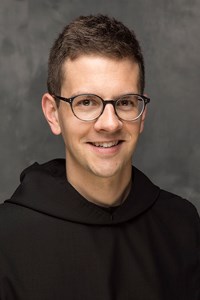 Br. Simon is a former resident of Findlay, OH, and he is a graduate of the University of Dayton, earning a bachelor’s degree in communication management in 2010.

He worked as an associate editor for the national office of Beta Theta Pi fraternity from 2010-11 and then at Saint Meinrad Archabbey as the director of alumni relations from 2011-14. He also served as a college intern for three summers in Saint Meinrad’s “One Bread, One Cup” program.

He is currently a full-time student in the seminary in his second year of theology. Br. Simon cuts the grass in the monastery courtyard, sandblasts designs into St. Meinrad sandstone, and enjoys sharing about monastic life to audiences that might be unfamiliar with this way of religious life.

Br. Nathaniel is a native of Grand Rapids, MI, and a 2011 graduate of the University of Dayton with a bachelor’s degree in chemical engineering.

He worked for three years as a production manager in the byproducts and coal handling divisions at United States Steel in the St. Louis, MO, area. He also served as a college intern for two summers in Saint Meinrad’s “One Bread, One Cup” program.

He is currently a full-time student in the seminary in his first year of theology. He is also the master of ceremonies for liturgies in the Archabbey Church. Br. Nathaniel also works as an ACE certified personal trainer with the Wellness Department and is one of the project organizers for Peanut Brother. 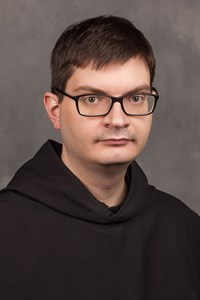 Br. Joel is formerly of Mount Carmel, IL, and a graduate of Southern Illinois University, with a bachelor’s degree in English literature. He earned an associate degree at Wabash Valley College. He also studied at Ivy Tech Community College for drafting and design.

He formerly worked as a tool and die machinist and a design engineering technician at Hansen Corporation. He attended Saint Meinrad Seminary and School of Theology for one year before entering the monastery.

Br. Joel currently works as an assistant in the liturgical music office, as an oblate dean, as webmaster of the Swiss-American Congregation, and as a podcast host and composer.

Br. Jean, formerly of Poway, CA, is a 2013 graduate of Sonoma State University with a bachelor’s degree in anthropology. 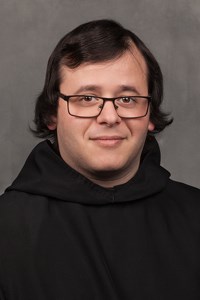 He has been a youth ministry volunteer and an intern at St. Gabriel Parish in Poway, and he worked in the shipping department of a moving company.

Br. Jean is an assistant in the monastery dining room and assistant guestmaster in the Archabbey Church. In addition, he is learning to make stained glass windows and he expects to complete a master’s degree in theology at Saint Meinrad Seminary and School of Theology in May.

In professing solemn vows of obedience, fidelity to the monastic way of life and stability in the community at Saint Meinrad, the monks become full and permanent members of the Benedictine community.