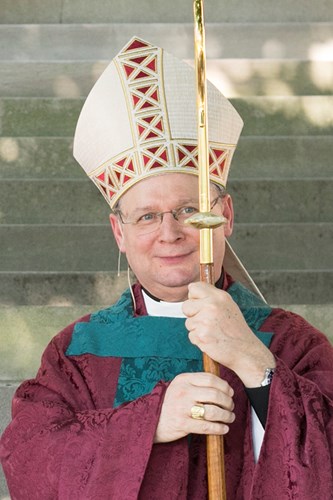 Archbishop Peter Wells, the Vatican’s ambassador to five countries in southern Africa, was honored on July 24 with the Distinguished Alumnus Award, at the annual Saint Meinrad Alumni Reunion. He graduated from Saint Meinrad College in 1987.

The award, given by the Saint Meinrad Alumni Association, was begun in 1990 to honor alumni who exemplify the Gospel values and have provided exemplary service in their lives or professions. The association’s board of directors reviews nominations for the award annually and makes the recommendations.

Peter Wells came to Saint Meinrad as a college student in 1985 to study for the priesthood for his home diocese of Tulsa, Oklahoma.

He graduated in 1987 and then attended the Pontifical North American College in Rome for his theology studies. He was ordained a priest for the Diocese of Tulsa in 1991.

In the Diocese of Tulsa, he served as the associate pastor of Holy Family Cathedral in Tulsa, as private secretary for the bishop, and as vicar for religious education for the diocese.

In the latter role, he developed a nationally imitated program to teach theology to lay Catholics. At one time, the diocese’s Pastoral Studies Institute offered both a bachelor’s degree in pastoral ministry and a master’s degree in theology studies.

In 1992, Archbishop Wells earned a licentiate in theology from the John Paul II Institute for Studies on Marriage and the Family at the Pontifical Lateran University.

After working in the Tulsa Diocese for several years, he was called to Rome, where he earned both a licentiate and a doctorate in canon law from the Pontifical Gregorian University, in 1998 and 1999, respectively.

After graduating from the Pontifical Ecclesial Academy in Rome, where he studied international law and papal diplomacy, Archbishop Wells join the diplomatic service of the Holy See on July 1, 1999.

His first diplomatic assignment was to the Holy See’s embassy in Nigeria. Three years later, in 2002, he was transferred to Rome to work in the Vatican at the Section for General Affairs of the Secretariat of State.

This department handles the everyday administrative functions of the Pope, which includes preparing papal documents and assisting appointments with the Roman Curia. They also publish official papal announcements through the Vatican Press Office and are responsible for keeping records.

In 2006, he was appointed to head the English Section for General Affairs., through which all material and correspondence in English going to or coming from the Holy See must pass.

In February 2016, he was appointed by Pope Francis to his current position – papal nuncio to five countries in southern Africa. Those include South Africa, Botswana, Lesotho, Namibia, and Swaziland. At that time, he was also named an archbishop.

He becomes the 27th Saint Meinrad alumnus to receive the Distinguished Alumnus Award.